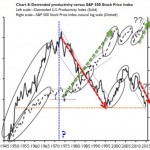 Echoing the grave concerns of no lesser ‘maestro’ of manipulation than Alan Greenspan, Wells Capital Management’s Jim Paulsen notes that while the U.S. stock market has risen by about 3 times from its crisis low in March 2009; much of this advance has been against a backdrop of disappointing productivity gains… should productivity growth remain subpar, stock market risk seems to be rising.

[ZH: note the major decoupling that occurred between productivity gains and stock market performance in the early 70s… now what else happened then?]

Since late 2011, the stock market and productivity have exhibited an uncommon divergence. Stock prices have continued to rise despite significantly weak productivity growth.

What does this divergence suggest?

* * *
So just as The Fed waits for the “inevitable” rise in wages… so permabulls wait with breathless anticipation for a resurgence in productivity… which is odd given Greenspan’s explanation of just how America’s “entitlement” society – which is getting bigger – is nothing but an anchor around the neck of US productivity hopes.