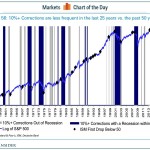 The current stock market rally has been a pretty smooth, upward ride for investors.

Are we past due for a correction?

“A correction is not past due,” writes David Bianco in his 2014 outlook.

Bianco runs us through the history of corrections in his note:

S&P 500 corrections of 10% or more, including those that turned into bear markets, occur nearly every 1.5 years (357 trading days) on average since 1957. The last correction began over two years ago (550 trading days) in the summer of 2011, but that correction was severe and nearly a bear market with a 19% decline. But more importantly, there is enormous variation around the mean of trading days between corrections. The STD is higher than the mean, thus a correction is not more than 80% likely, based on precedent since 1957, until 750 days from the last correction. Moreover, corrections are less frequent the past 25 years vs. the past 50+ years. From 1990 to 1997 the S&P avoided a 10%+ decline (1994 was close), also from April 2003 to September 2007. Thus 4 years without a correction is possible, especially if earnings climb and inflation and interest rates stay low vs. history, but a higher PE raises the risk.

So, we’ve seen longer periods without corrections in the past. But that doesn’t mean we’re in the clear.

It’s worth noting that Bianco sees the S&P 500 climbing to just 1,850 in 2014. This is the lowest target coming from the strategists followed by Business Insider.