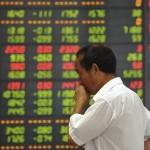 The accounts had been found to have abnormal bids for shares or bid cancellations and were thus suspected of affecting share prices or influencing investment decisions by other investors, the China Securities Regulatory Commission said in its official microblog weibo.

The regulator also said that it was investigating individuals and institutional investors who used automated trading strategies in the Shanghai and Shenzhen stock exchanges so as to analyze their impact on the stock market.

China has taken a slew of steps to rescue its stock market after its 35-percent plunge in less than four weeks since June 12, including clamping down on irregularities.