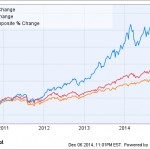 To say that biotech stocks have performed well as a group over the last two years is an understatement; they have absolutely crushed the broader markets. For example, the iShares Nasdaq Biotech Index has more than tripled the performance of the S&P 500 , and more than doubled the NASDAQ Composite , since 2012.

This sustained move upward, though, has repeatedly been doubted by pundits and analysts alike, with many calling it a “bubble”. Despite these warnings, major funds have generally been pouring into biotechs of all shapes and sizes — that is, until now.

At the third quarter’s end, we discovered via quarterly 13F filings, that closely watched money manager George Soros closed out,or sold off large chunks, of ;some of his biotech positions. Most notably, the Soros Fund Management dumped shares of Ariad Pharmaceuticals , Celgene Corporation , and Sarepta Therapeutics .

Does this activity signal that Soros thinks the biotech bull run is finally coming to an end? To answer this pivotal question, let’s consider why he may have sold off each of these companies.

Ariad won’t be cash flow positive for years
Although Ariad’s total net revenues and sales of its flagship cancer drug, Iclusig, have been growing by double digits quarter over quarter, the company is still hemorrhaging cash. In the third quarter, Ariad reported that Iclusig net sales increased by 22% to $14.5 million, compared to the second quarter of 2014.

Unfortunately, the company lost $50.1 million during the quarter due mainly to its extensive clinical trial program aimed at expanding Iclusig’s label. With $273 million in cash and cash equivalents remaining at the end of the third quarter, Iclusig sales will therefore have to rocket higher from current levels, or the company will have to cutexpenses in a big way, in order to avoid diluting shareholders via a large secondary offering, perhaps within the next six months . ;While the Street is expecting Ariad to narrow its loss per share next year by 32% , this still won’t be enough to spare shareholders from a capital raise.

Celgene might be topping out
When considering why Soros sold off his entire position in Celgene , I think it’s important to remember that his fund tends to be focused more on short-term gains. Viewed this way, I believe this sell makes some sense.

Celgene’s shares have been roaring higher this year, driven by double-digit sales growth of its cancer drugs Revlimid, Abraxane, and Pomalyst. The net result is that Celgene’s shares are presently trading at rich trailing-12-month, price-to-earnings ratio of almost 60. And even when factoring in sales of its newly launched ;psoriasis drug Otezla, experts still have shares trading at a forward price-to-earnings ratio of 24 — right at the sector average. In short, this stock isn’t exactly cheap and may have trouble pushing much higher next year.

Sarepta is a speculative bet that has yet to pan out
In the third quarter, the Soros Fund sold off 52% of its stake in Sarepta Therapeutics, presumably after the company announced that the Food and Drug Administration questioned the integrity of its clinical data for eteplirsen, an experimental exon-skipping therapy indicated for Duchenne muscular dystrophy.

The problem is that Sarepta’s future hinges almost entirely on the success — or failure, of this clinical candidate, as most of its remaining pipeline is based on the same technology. In an effort to circumvent the normal clinical testing process, management has repeatedly approached the FDA about reviewing a New Drug Application based on a small midstage trial, along with its open-label extension study. For its part, the FDA hasn’t seemed particularly enthusiastic about this idea, and has put a number of barriers up — such as requesting additional safety data and independent verification of trial data — prior to a formal review.

If Sarepta can finally overcome the FDA’s roadblocks to an accelerated review, this stock has the potential to absolutely soar. On the other hand, I am not optimistic that the FDA will indeed grant a formal review without a larger, late-stage study already in hand.

Was Soros right to reduce his exposure to these three biotechs?
My take is that the Soros Fund does appear to be getting more cautious when it comes to speculative biotechs like Ariad and Sarepta. Over the last two years, Mr. Market has been happy to reward huge valuations to smaller biotechs based on the “potential” of their pipelines. Ariad, for example, presently sports a $1.38 billion market cap, which is about 29 times itstrailing -12-month sales of Iclusig. So I think the Soros is expecting a trend reversal, with valuations starting to reflect actual revenue.

Regarding Celgene, I agree that the stock is no longer cheap when viewed on a short-term basis. That said, Celgene has an amazing pipeline and a growing cash position that could lead to a high-impact acquisition, making it a potential good long-term buy.

1 great stock to buy for 2015 and beyond
2015 is shaping up to be another great year for stocks. But if you want to make sure that 2015 is your best investing year ever, you need to know where to start. That’s why The Motley Fool’s chief investment officer just published a brand-new research report that reveals his top stock for the year ahead. To get the full story on this year’s stock — completely free ;– simply click here .

The article Does George Soros Think Biotech’s Bull Run Is Finally Coming to an End? originally appeared on Fool.com.

George Budwell has no position in any stocks mentioned. The Motley Fool recommends Celgene. Try any of our Foolish newsletter services free for 30 days . We Fools may not all hold the same opinions, but we all believe that considering a diverse range of insights makes us better investors. The Motley Fool has a disclosure policy .