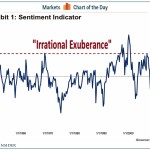 There are many ways to assess the state of the stock market.

You could also focus on sentiment, which is somewhere in between the fundamental and technical approaches. In addition to considering hard data regarding corporate behavior and trader activity, sentiment analysis also involves soft data like investor surveys. Psychology plays a heavy role.

Money management firm GMO has its own proprietary measure of sentiment. Here’s how they describe it:

It’s quite the hodgepodge of indicators. But the bottom line is that they look stretched.

“Our finding, which comes as no great surprise, is that sentiment has reached an extreme level, fast approaching two standard deviations above its long-run average, which goes back to 1950,” writes GMO’s Edward Chancellor. “In fact, the current score on our composite measure has only been exceeded in 1968 (during the “Go-Go Years,” also known as the “Great Garbage Market”), and between 1998 and 2000 (during the TMT bubble).”

Chancellor’s comment was part of GMO’s Q1 letter, which included Jeremy Grantham’s forecast for a major stock market sell-off at around the time of the 2016 presidential elections.

“Clearly, the U.S. stock market is not as manic as it became during the late stages of the Dotcom bubble – IPO issuance and first-day returns and mutual fund flows are far below their record levels at the turn of the century,” added Chancellor. “M&A activity is also less frantic. Still market sentiment going into this year was above the level of December 1996 when Alan Greenspan first noted (but did nothing about) the market’s “irrational exuberance.””

“Irrational Exuberance” was also the title of Robert Shiller’s book, the first and second editions of which predicted the dotcom and housing bubbles respectively.