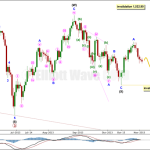 Yesterday’s analysis expected downwards movement to a minimum of 1,308 before
upwards movement. Price moved lower as expected, reaching down to 1,305.97.

The corrective structure of minute wave b is still incomplete.

The structure for primary wave 4 cannot be a flat correction, because what
would be the B wave is well less than 90% of what would be the A wave. That
is why I have labeled it as a double.

Because intermediate wave (X) is quite shallow I would expect primary wave
4 is most likely a double zigzag rather than a double combination. Double combinations
move price sideways and their X waves are usually deeper than this one is.
Double zigzags trend against the main direction, and their purpose is to deepen
a correction when the first zigzag did not take price deep enough. So I will
be expecting intermediate wave (Y) to subdivide as a zigzag and to take price
comfortably above 1,433.83. It should last about 35 to 45 days or sessions
in total.

Within the zigzag of intermediate wave (Y) minor wave B may not move beyond
the start of minor wave A. This wave count is invalidated with movement below
1,251.76.

The structure of minuette wave b is closer to completion, but it is still
incomplete.

Minuette wave (b) is a 101% correction of minuette wave (a) which indicates
a regular flat is unfolding for minute wave b. Regular flats most commonly
have C waves which are close to equality with A waves. I would expect minuette
wave (c) to overshoot the parallel channel slightly.

It is possible that a large contracting triangle is unfolding for primary
wave 4, but it has a lower probability than the main wave count. Double zigzags
and combinations are in my experience more common structures than triangles.
However, triangles are not rare, they are just less common.

Triangles are very tricky structures to analyse. I normally only consider
them when they show themselves clearly, which is close to the end of the structure.

At this stage within a possible triangle only waves A and B would be complete.
One of the five subwaves should subdivide into a double zigzag, be more time
consuming, and have deeper corrections than the other subwaves.