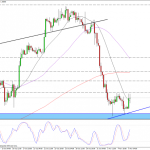 The euro is trading higher this morning, after finding support once again around 1.3450 yesterday. The pair also failed to close below the 50 fib level again, confirming both of these levels as major levels of support. Given that the recent sell-off in the euro is largely due to rising expectations of an ECB rate cut tomorrow, I think we’re unlikely to see this level broken again today, unless news of a rate cut is leaked. At the same time, I don’t see the euro rallying much either, which suggests the sideways trading that we’ve had this week is likely to continue for another 24 hours yet. With that in mind, 1.3524, this week’s high, is likely to continue to be a key level of resistance for the pair. If this is broken, the next level of resistance should come around 1.3566, followed by 1.36. If we do see a break below the current support, around 1.3450, which is see as unlikely without a rate cut, the next big support level should be 1.34, followed by 1.3382 and 1.3324.

Sterling is continuing to climb higher this morning, after breaking through the 1.6057 resistance level, and the 50 and 200-period SMAs on the 4-hour chart. We did see some choppiness around 9.30 following the release of some UK data, with the pair finding resistance around 1.6115 and support around 1.6055, from the 50-period SMA on the 4-hour chart. This resistance level is not only a previous level of support for the pair, it is also the 61.8% retracement, of the move from 23 October highs to Monday’s lows. If we see a break above here, it should prompt a move back towards the descending trend line, dating back to 2 August 2009, where the pair has so far failed to close above. The pair should find resistance along the way around 1.6136, 1.6150 and 1.62. If the pair instead edges lower, it should find support around 1.6077 (200-period SMA on 4-hour chart and previous resistance level), 1.6062 and 1.6050 (50-period SMA on 4-hour chart).

The dollar is pushing higher against the yen this morning after failing to close below the 50-day SMA. This could prompt another attempt at a break above the descending trend line, which dates back to 22 May. I still don’t see this level being broken at this stage as this would prompt quite an aggressive move higher. We may have to wait another few weeks for this. If we do see this broken, the next target would be 99.66 followed by 100.60. For now though, the next target on the upside will be 98.84, a previous level of resistance, followed by 99. If, on the other hand, the pair edges lower as the day goes on, the next target will be yesterday’s lows of 98.16, where the 50-period SMA on the 4-hour chart will also provide support, followed by 98, 200-period SMA on the 4-hour chart, and 97.80, Friday’s low.