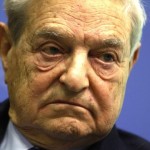 One day every quarter, the world’s big fund managers reveal some of what they’re buying and selling in their 13-F regulatory filings.

Generally speaking, these revelations aren’t taken too seriously as they are 45-day-old snapshots. But over the weekend, one gigantic $1.3 billion position raised some eyebrows.

Puts protect the holder of the option from declining prices. Soros’ position makes money if $1.3 billion worth of the SPY declines in value.

And at $1.3 billion, this represents the largest position in the portfolio.

After touching an all-time high of 1,850 in January, the S&P 500 got hit with some volatility that brought the index down by around 6%. However, markets have been coming back, and now the S&P is less than 1% away from setting a new high.

Again, these 13-Fs reveal holdings as of the end of Q4. So, we do not know if and how that position has changed since then.

SEE ALSO:
GOLDMAN: Here’s What Our Clients Worry About The Most