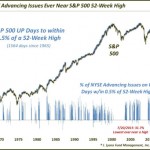 When we posted yesterday’s piece on the stock market’s weak internals (If Beauty’s On The Inside, This Market Wins The Ugly Contest), we weren’t sure if things could get any worse – and by how much – with the major averages still able to hold near 52-week highs. Well, the answers were “yes” and “a lot”. In yesterday’s piece, we noted that Friday produced one of the ugliest “Up” days in memory, based on the internals. Again, the internals, as represented by indicators like advance-decline breadth, advance-decline volume and new highs-new lows, are a gauge of the health of the broad stock market. This health can differ, sometimes significantly, from the market’s appearance from merely watching the major averages (e.g., the S&P 500 and Nasdaq Composite, etc.) We like to see strong internals as an indication of a healthy market. When a rally “thins”, i.e., the internals weaken, it can be a sign of vulnerability for the broad market, even with the major averages at their highs.

Well, we can say with confidence that yesterday, July 20, 2015, was the thinnest new high on record in the U.S. stock market (while the Nasdaq Composite closed at a new high, we are taking some license with here with the S&P 500 as it closed up to within 0.12% of it 52-week high).

Here is our evidence (all data from Reuters):

4.) Yesterday saw the fewest % of Nasdaq Advancing Issues ever at a Nasdaq Composite 52-Week High

5.) Yesterday saw the lowest % of Nasdaq Advancing Volume ever for a Nasdaq 52-Week High

Despite the new high in the Nasdaq Composite, yesterday saw just 42% of volume on the Nasdaq go to Advancing Issues. That is the weakest reading of all the 749 Nasdaq new highs since 1988.

6.) Yesterday was just the 2nd time ever with more Nasdaq New Lows than New Highs at a Nasdaq 52-Week High

With 154 New Lows on the Nasdaq versus 107 New Highs, the differential was not quite as egregious as that on the NYSE. However, it was just the 2nd time of all 756 Nasdaq 52-week highs since 1986 that saw more New Lows than New Highs on the exchange. Only 3 days between April 5-8, 1999 also had more New Lows than Highs.

Our view of the thinning out of market breadth has been well documented. It holds potentially very negative ramifications for the broad stock market. This isn’t just a 1 or 2-day wonder either. It is a trend that has been building for about 12 months now. This development doesn’t have to be an immediate death-knell for the bull market. However, eventually it will necessarily take its toll. Considering the thin nature of recent highs, that day of reckoning would appear to be fast approaching. If this rally gets any thinner, our Candlestick charts will stop casting shadows.