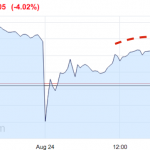 Stocks are rolling over again.

It’s been a chaotic day in markets, with the Dow crashing more than 1,000 points, the S&P 500 was down 120 points, and the Nasdaq was down 393 points shortly after the market open. All of the major averages were down 5% or more at their worst levels.

The market recovered most of its losses during the morning, but near 3:00 pm ET, the Dow was rolling over again and was down more than 650 points for the day. The S&P 500 was down 84 points and the Nasdaq was off 187 points.

Each of the averages, at these levels, were off more than 3%.

What seemed to trigger the sell off as a big decline in assets around the world overnight.

China’s Shanghai Composite crashed 8.5% in what is now being dubbed China’s “Black Monday.”
European stock markets got obliterated, with Germany’s DAX falling into a full-blown bear market.
Every stock in Britain’s FTSE 100 was in the red.
The CBOE Volatility Index, or the “fear index,” has gone parabolic spiking over 45%.
And in an ominous sign for the global economy, commodity prices have plunged to their lowest levels since 1999, while crude oil has made a new post-financial crisis low.

The early selling was being attributed to any number of things, including China’s slowdown, renewed uncertainty in Greece and the rest of the eurozone, the stronger dollar, the prospect of higher interest rates, stretched stock valuations, and the list goes on.

And while many have eyed China’s stock market as the main reason for this sell-off, last week we noted that analysts at Bank of America Merrill Lynch dubbed the prospect of the Fed raising rates as the “ultimate risk.”

In short, the idea is that if central banks stop being as friendly to markets as they’ve been over the last several years, markets will freak out. For their part, economists at Barclays think the recent chaos in markets has pushed the Federal Reserve’s most likely date for raising interest rates out to March 2016.

But as the dust has settled, Business Insider’s Mike Bird noted that the collective host of reasons being cited by markets, in the aggregate, don’t make much sense.

And while markets are off their lows and the earlier panic in the market has settled, some strategists are still wary.

In an afternoon email, Peter Tchir at Brean Capital wrote that, “We are all looking for capitulation and wondering if that is what we had on the open? I’m afraid all we had is chaotic dislocation, which I don’t think is the same thing.“

“[S]entiment which seemed incredibly pessimistic last night and this morning has turned almost jovial in the past hour. In any case, risk management models which were re-calibrated with last week’s price action will need to be reworked and I doubt they will be telling traders to increase positions. I am nervous that in the time it took me to type this the Dow could be plus or minus 200 points since I started. Hardly an environment for large risk taking. Liquidity is completely of the “faux liquidity” which has been plaguing the treasury market for months.”

SEE ALSO: This chart is ‘the danger’