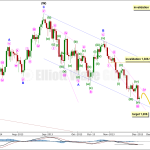 Yesterday’s short term target was at 1,212 for the end of a fifth wave. Downwards movement ended at 1,215.36, 3.36 short of the target. The structure looks complete.

The wave count is unchanged from yesterday.

Gold is still within a large fourth wave correction at primary wave degree which is incomplete. It is unlikely that primary wave 4 was over at 1,433.83 as a single zigzag because it would have lasted only nine weeks. Its counterpart primary wave 2 lasted 53 weeks. This is too big a difference for the wave count to have the “right look”.

I would expect downwards movement to find support at the lower edge of the parallel channel drawn here about intermediate wave (X).

I have copied over the pink channel from the daily chart. I would expect minute wave iv to find resistance at the upper trend line.

Minute wave ii was a shallow 36.5% regular flat correction. If minute wave iv ends about the 0.236 Fibonacci ratio of minute wave iii at 1,240.72 then it may end at the upper trend line and would show alternation in depth with minute wave ii.

If minute wave iv is a combination, expanded flat or running triangle then within it there may be a new low below 1,215.36, and so there can be no lower invalidation point.

At this very early stage there are several different structural possibilities for minute wave iv. Overall I would expect very choppy, overlapping sideways and upwards movement for about four days. As this corrective structure unfolds and becomes clearer the labeling within it will probably change.

Minute wave ii lasted four days, and I would expect minute wave iv to be about the same duration.

Minute wave iv may not move into minute wave i price territory. This wave count is invalidated with movement above 1,306.15.