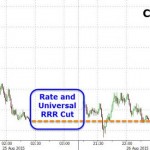 Update: Chinese stocks are seeing no lift whatsoever from the rate cuts…

As we detailed earlier:

The Asia morning begins mixed in stock markets, The PBOC explains itself “this is not a shift in monetary policy,” – except it is the first such set of measures since 2008, further deleveraging as China margin debt drops CNY1 Trillion from June peak to lowest since March, Regulators begin probing securities firms (and their malicious short sellers), Index futures trading fees will be raised and trading positions restricted. Stocks are limping only modestly higher (after the rate cuts) as Yuan is fixed at 6.4043 – the lowest since August 2011.

Before China opens, it’s worth noting that all the post-China close, pre-China open exuberance from the PBOC multiple rate cut has been eviscerated…

The rate cut did have some impact…

And stocks are only marginally higher..

And bearin mind that…

*ABOUT 17% OF MAINLAND STOCKS STILL HALTED FROM TRADING

Some more good news as deleveraging continues… lowest since March 2015

But more restrictions are put in place:

Haitong Securities, GF Securities, Huatai Securities and Founder Securities
All made stock exchange statements that they had received notices from the China Securities Regulatory Commission
For suspected failure to review and verify clients’ identities

This morning, as China wakes up…

…And realizes that PBOC policy changes have not been working. As BofAML explained,

The combined rate and RRR cuts announced today, clearly targeted to boost A-share market sentiment in our view, may provide some temporary sentiment relief. However, we doubt that this represents the bottom of the market…

It appears to us that the government has significantly reduced its direct purchase in the market in recent days and is now trying to replace the direct intervention with the softer, more market oriented, and indirect support. We doubt this will work beyond a few days. As a result, we recommend selling into any rebound. A few things worth highlighting:

Psychologically, the cuts may have some impact in the short term because they are the first combined interest rate and universal RRR cuts since Dec 2008, after a sharp market fall. Nevertheless, we doubt the impact will be significant as they are already the eighth cut to either rate or RRR since late 2014.
The key overhangs of the A-share market are stretched valuation and high leverage. It’s our view that the only way that the government can hold up the market is by being the buyer of last resort, i.e., the direct support that the government appears to be withdrawing
From real economy’s perspective, we doubt monetary loosening is the solution to China main problem – overcapacity/a lack of consumption, and leverage. All it does may be to encourage property speculation, likely using more leverage
If the government fails to defend the A-share market ultimately, the key risk we should watch out for is financial system instability.

It’s not just BofA that is not buying it… As Bloomberg reports, China’s latest cuts in RRR and interest rates will limited boost to stks, according to most analysts and economists. Move is mainly aimed at supporting economy, not starting another mkt rescue.

Putting China’s demise into context – off the March 2009 lows…

And here’s a gentle reminder of who to listen to from now (or not!)…