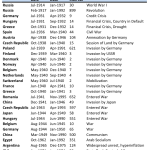 Turmoil on the Russia-Ukraine border has investors and traders running various scenarios, including worst-case scenarios.

Not that anyone is saying this is likely today, but a shutdown of the Russian stock market isn’t unprecedented.

“Russia’s first recorded stock market came into existence in 1810 but shut down in July 1914 at the start of World War I,” noted Morgan Stanley’s Jonathan Garner. “The stock market reopened for two months in 1917 before shut down again after the 1917 revolution. It did not re-open until January 1992.”

Here’s a list of some notable stock market shutdowns from Garner.

SEE ALSO:
The Secret Trading Strategy From The 1930s That Hedge Funders Don’t Want You To Know About