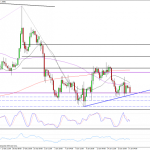 The euro is still looking bearish against the dollar despite rallying for much of yesterday’s session. The pair failed to break above this week’s highs during the rally and closed below the marabuzo line of the previous candle. This suggests yesterday’s rally was just a brief correction rather than a trend reversal. The fact that this came after the formation of an evening star formation, or a variation of, makes it even more bearish. This was also formed at a key resistance level, where the 20-day SMA intersects the 38.2 fib level, which again adds to the bearish feeling in the market. Further confirmation of the continued downtrend should come with the break of the ascending trend line on the 4-hour chart, followed by the break below previous support levels, being 1.3580, 1.3569 and 1.3547. The next target then would be 1.3522, a previous level of support and the 61.8% retracement of the move from 7 November lows to 27 December highs.

Sterling was looking a little more bearish over the last couple of days, having broken below the ascending trend line, before retesting it and failing to close back above. However, the extremely strong retail sales number this morning brought this bearish move to an abrupt end, prompting a rally of more than 100 pips and sending the pair back above the trend line while taking out numerous resistance levels along the way. We may see a correction of some kind as the day progresses but this may also mark the end of the bearish move in the pair. This will become clearer later on today, depending on where the candle closes. A close above the mid-point of Wednesday’s candle would result in a morning star formation, which is a very bullish setup. If the pair has turned more bullish, the next target will be 1.6515, followed by 1.66, both of which are previous levels of resistance. A close below the half way point of Wednesday’s candle on the other hand would be very bearish and potentially mark the second day that the pair has failed to break back above the trend line. The next support in this case would come around 1.6316, where the 50-day SMA intersects the 38.2 fib level, followed by 1.6227, 1.6213 and 1.62.