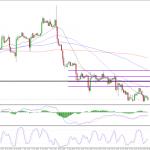 The euro is continuing to look weak against the dollar in the medium term having recently broken below the neckline of the double top. However, before we see any further sell-off, we may see a bit of a correction in the pair, with the neckline potentially being tested as a new level of resistance. The most recent lows in price action have not come alongside similar lows in the stochastic causing a positive divergence. While I don’t expect this to prompt a significant push higher, it would suggest the recent sell-off has lost momentum and traders may now wait for a more attractive entry, which the neckline around 1.37 would provide. This would also coincide with the 50 fib level – 12 May highs to 27 May lows. The pair has found clear support around 1.3610 over the last few trading sessions and is therefore going to be a key level going forward. A break of this would be a significant signal that the downtrend is set to continue.

Sterling may be set for a bigger correction than initially thought having broken through both the ascending trend line – which dates back to 12 November – and the neckline of the head and shoulders. The conservative target following the break of the neckline – being the size of the move from the shoulder to the neckline, projected lower – has already been hit. The next question is whether the more aggressive target will be reached – being the size of the move from the head to the neckline, projected lower. This would take the pair back towards 1.6715, although I’d be inclined to be a little conservative here given that the previous low from 15 May lies around 1.6730. I imgine this will prove to be a significant support level. The important point now will be whether we will see a daily close below the 50-day SMA, which is currently providing strong support. This would also mean a close below the trend line and all of the key fib levels. At this stage I would become more bearish and be looking for a more significant correction.