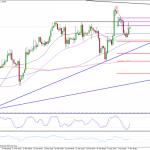 The euro is showing some weakness against the dollar despite trading higher on the day. As you can see on the 4-hour chart below, the pair has made lower highs and lower lows since gapping lower yesterday, which in itself indicates a downtrend. It has also found resistance around 1.3773, a previous level of resistance that the pair had initially broken above before the sell-off began this week. This is also the 50% retracement of the move from Friday’s highs to this morning’s lows. The aggressive sell-off at this level is quite a bearish signal and could prompt a move back towards today lows of 1.3720, with the next potential support below here coming around 1.3708, 61.8% expansion of today’s retracement, followed by 1.3694, previous low and 1.3675, a speculative trend line that dates back to 6 February lows and is awaiting confirmation.

Sterling is potentially looking more bullish against the dollar this morning despite seeing a significant amount of selling yesterday. The pair retraced back to the top of the flag that it broke above on Thursday, before finding support and edging higher. Ordinarily, this would be seen as confirmation of the break, and would be especially bullish as it broke in the direction of the prevailing trend. The only thing that casts doubt on this is risk aversion being seen in the markets at the moment and the fact that the pair rebounded quite aggressively off the 61.8 fib level on the 4-hour chart. This would typically be viewed as bearish. With all that in mind, I think we still require confirmation of the new, or continuing trend, with the former coming from the pair making new lows below 1.6639 and preferable back inside the flag, and the latter coming from a break above the descending trend line from Friday’s highs and, even better, a break above those highs.

The dollar is looking a little more bullish against the yen today, but this may just be a little reprieve following yesterday’s flight for safety which saw traders favour the yen over the greenback. The big gap lower yesterday resulted in a break below the ascending trend line which could prompt an initial move towards last month’s lows of 100.75. We could get some indication today of whether that will be the case from where the pair closes. A daily close back above the trend line, and even better above the mid point of Friday’s candle, would come across much more bullish. On the other hand, a daily close below the trend line could be seen as confirmation of the break and spark the next push lower. The latter looks more likely at the moment, with the pair having failed to break above the descending trend line dating back to 26 February on the 4-hour chart, or close above the 38.2 fib level on the same chart.