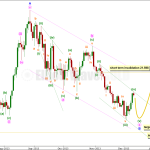 Last analysis of Silver expected more upwards movement towards a target at 20.184 before the resumption of the downwards trend for one final fifth wave.

Upwards movement continued and has reached 0.305 above the target so far.

The narrow channel drawn about minute wave c is drawn using Elliott’s second technique. Draw the first trend line from the ends of minuette waves (ii) to (iv), then place a parallel copy upon the end of minuette wave (iii). I would expect minuette wave (v) to end within this channel.

At 18.999 minuette wave (v) would reach equality with minuette wave (i). This would see the fifth wave truncated, which is possible after a strong extended third wave. Equality with the first wave is the most common ratio for a fifth wave, so that is what I am using for this target calculation.

This C wave is very long indeed which fits the overall behaviour of expanded flat corrections which have particularly deep B waves.

Ratios within subminuette wave c are: micro wave 3 has no Fibonacci ratio to micro wave 1, and micro wave 5 is 0.02 longer than 0.236 the length of micro wave 1.

Within minuette wave (v) no second wave correction may move beyond the start of the first wave. This wave count is invalidated with movement above 20.489.

If this wave count is invalidated with upwards movement then I would expect that minuette wave (iv) is continuing higher. The invalidation point moves up to 21.598.