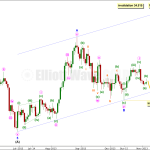 Last week’s analysis of Silver expected downward movement for a second wave correction which is exactly what has happened. With more of this structure now to analyse I can now calculate a target for it to end for you.

Intermediate wave (B) is unfolding as a simple zigzag. Minor wave A subdivides as a five, and minor wave B is now a complete “three” (a double zigzag).

Within minor wave C minute wave ii may not move beyond the start of minute wave i. This wave count is invalidated with movement below 20.512.

I would expect minuette wave (c) downward to take about two or three days to complete. When it is done I will expect a trend change and the resumption of the upward trend. The next wave up should be a third wave, and should show strong upward momentum.

Minute wave ii may not move beyond the start of minute wave i. This wave count is invalidated with movement below 20.512.