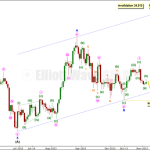 Last week’s analysis of Silver expected downward movement for a second wave
correction which is exactly what has happened. With more of this structure
now to analyse I can now calculate a target for it to end for you.

Intermediate wave (B) is unfolding as a simple zigzag. Minor wave A subdivides
as a five, and minor wave B is now a complete “three” (a double zigzag).

At 27.417 minor wave C would reach equality in length with minor wave A. Minor
wave A lasted 43 days, and minor wave B lasted a Fibonacci 34 days. I would
expect minor wave C to last between 34 and 43 days, or thereabouts.

Within minor wave C minute wave ii may not move beyond the start of minute
wave i. This wave count is invalidated with movement below 20.512.

I would expect minuette wave (c) downward to take about two or three days
to complete. When it is done I will expect a trend change and the resumption
of the upward trend. The next wave up should be a third wave, and should show
strong upward momentum.

When this channel is breached by subsequent upwards movement then I would
have confidence minute wave ii is over, and that minute wave iii would have
begun.

Minute wave ii may not move beyond the start of minute wave i. This wave count
is invalidated with movement below 20.512.