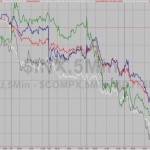 But “everything was awesome”?

Who is to blame for all this?

This is notable.. VIX was pressed notably lower into the close and stocks went nowhere – either Kevin Henry just lost his mojo OR traders are unwinding hedges and underlying exposures at the same time.. in other words – derisking in size!

AMZN retraced over half its overnight gains…