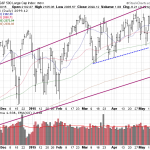 It looked like it was going to be a very nasty day premarket but in the end losses were mild for U.S. indexes.  Still it remains time to be cautious as we have been for the past two weeks.  The S&P 500 fell 0.29% and the NASDAQ 0.35%.   The bond market continues to cause some issues as not only the spike in U.S. yields but bond yields in Europe cause some issues.  It is not so much that they are increasing in Europe – but the pace of the reversal.

This day in ridiculous financial maneuvers:  Greece repaid an emergency loan due to the IMF by tapping emergency funds from…. the IMF.  Talk about Peter and Paul.

Keen to show the world that it can honor its debt obligations, the Greek finance ministry made a 750 million euro ($838.2 million) loan repayment to the International Monetary Fund (IMF) on Monday evening, a day before it was due.  Greece said it tapped an emergency IMF holding account to repay the debt.

U.S. indexes are still in a not great area – no reason to press bets and it remains a time to be cautious.

Early in the day 10 year Treasury yields had spiked to the mid 2.3% range but fell back by the close of the day.

Here is a 1 year chart of the yield of the German 10 year bond – you can see it has only rallied back to where it was in late 2014 but the pace of change has been extreme as all this has happened in a few weeks.

You can see this spike in their yields has been almost a perfect inverse correlation to their stock market in the past month.

Verizon (VZ) is buying AOL (AOL) for $50 per share or $4.4 billion in cash, with AOL CEO Tim Armstrong continuing to lead the company after it becomes a wholly owned Verizon subsidiary.

It was a rough day for The Gap (GPS) as same store sales disappointed.  Comparable sales for the Gap chain plunged 15 percent last month, compared with a projected 11 percent decline.

Rackspace Hosting (RAX) fell 13.5 percent, the most in eight months, after releasing a sales outlook that was below analysts’ estimates.