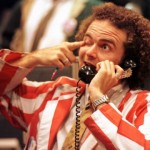 Regarding stocks, he thinks it should be another up-year for the market.

“On the back of very strong equity market performance in 2013, it is hard to conclude that equities haven’t “stolen” some 2014 returns,” he said. “Accordingly, while we think equities will experience further upside in 2014, we expect gains to be less ebullient and more volatile. With the significant rise in valuation (P/E ratios) in 2013, we expect that market gains will depend more on earnings growth than further multiple expansion.”

We asked Doll what he thought about those who have been warning of a stock market bubble that’s doomed to crash.

He said he doesn’t see a bubble. He continued by identifying and addressing what he considered to be the three signs of a bubble:

Excessive valuation: While valuations are up, he doesn’t believe they are excessive. During his presentation, he noted that the stock market rally had been supported by a big recovery in profits.
Excessive ownership: For years, investors had been moving money out of stocks and into bonds. And that trend has only begun to reverse. Doll noted that pension funds continue to be far under-exposed to stocks. Even as pension funds approach funded status, he believes there will continue to be a rotation into stocks as the fund managers face rising interest rates and long-term returns targets.
Excessive leverage: A lot of people have been talking about how margin debt is at a nominal record high. However, Doll reminded us that those margin debt levels must be considered relative to the stock market, which is also at an all-time high. Not only is debt as a percentage of market cap low, it’s also at levels below what we saw before the financial crisis.

This may not be satisfying to those who follow the many other indicators that reflect frothy markets.

It’s worth noting that Doll fully expects a market correction of around 10%, something he says would be quite normal.

SEE ALSO:
Here’s The Presentation Bob Doll Just Gave That Has All The Charts And Stats Behind His 2014 Predictions