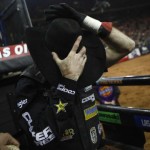 A competitor adjusts his hat before the gate opens for him to begin his ride, during the Professional Bull Riders invitational at Madison Square Garden in New York, January 6, 2013.

At one point this year, we declared Jefferies’ Sean Darby

the most bullish strategist on Wall Street

“We remain bullish on the US equity market versus its peers,” wrote Darby in his massive 68-page note. “We would expect the market to outperform emerging markets but trade in line with Europe. The US equity market offers selective value and we would expect the high level of margin debt as well as high investor sentiment readings to discourage very aggressive weightings in the short-term.”

While Darby is obviously bullish, he sees plenty of opposing forces pulling and pushing at the markets.

Equities are unlikely to suffer a major pull-back until a combination of disappointing earnings and deterioration in credit markets occurs. Equally, further share price gains appear capped given the recent rise in supply which has overwhelmed share buybacks. There are natural limits to PE expansion as companies will take the opportunity to raise ‘cheap equity’ from their perspective if the multiple expands too fast. However, if earnings growth fails to keep step with the price change and if the economy were to suffer a bout of weakness, then we believe equities would experience a fairly sharp de-rating given how high expectations have been raised.

“We expect double digit earnings growth but the impact of share buybacks to fade thus hurting y-y comparisons,” he added. “With valuations already stretched, earnings need to grow at least in line with forecasts to keep the multiple from becoming stretched.”

SEE ALSO:
The Stock Market Is Not Doomed To Crash — Here’s The Full Argument Why