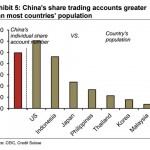 Stock-market investing in Britain is done mainly by professionals such as fund managers, folks trusted with other people’s money because of their increased understanding of investing. It’s the same way in the US, though Americans are more likely than Brits to maintain a small portfolio of stocks in which they have a personal interest.

But millions of ordinary citizens in China have accounts to buy company stock directly, and that’s causing big problems for the government now that markets are nosediving.

There are an estimated 90 million “retail” investors in China — normal folks who own shares. Credit Suisse reckons an incredible 80% of urban Chinese households have invested in equity, putting about 30% of their collective cash into stocks.

Credit Suisse has a great chart that puts in context just how huge all of this exposure is. The bank says about 258 million stock-trading accounts are open on the Shanghai and Shenzhen exchanges, China’s two major ones. A high proportion of those are likely to be retail investors, with a third of the total opened in just the past nine months.

As you can see below, that dwarfs the population of most Asian countries and is over 80% of the US population.

China’s huge retail-investor base explains both why stock markets are crashing right now and why the Chinese government is taking such extraordinary measures to try to stop the fall.

Ordinary people have borrowed money to buy shares. A dip in prices has led to lenders asking for more cash to cover losses. That is forcing retail investors to sell shares to raise cash, and the rush of sellers is pushing down prices.

As for why the Chinese government is so worried, it obviously doesn’t want millions of its citizens to be angry about losing money. Credit Suisse warned this week that the crisis could risk “social stability” in the country if it isn’t resolved quickly. CS analyst Dong Tao says “some homeowners mortgaged their house to invest in stocks.”

And the collapse is showing up the government. Here’s Credit Suisse: “The market weakness also undermines President Xi Jinping’s reform plans and anti-corruption campaign. Premier Li Keqiang expressed his strong preference for having ‘one big shot’ at stopping the panic after he returned from a European trip.”

That “one big shot” has turned into several big shots, after initial attempts failed to do much to stem losses.

NOW WATCH: Victoria’s Secret is making one mistake that is driving away a lot of women