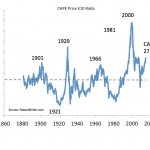 But as Marks writes in his recent memo to clients of Oaktree Capital Management: “We can’t take that approach as investors, however. We have to think about the future. We just shouldn’t accord too much significance to our opinions.”

Yet the pressure to venture an opinion about the markets and securities prices is so great in the media nowadays that there’s sadly no room for an honest “I don’t know.” Commentators are forced to make something up when in truth they really don’t know about something like the short-term direction of the stock market.

I’m sympathetic to this critique, not least because I think it’s true that nobody knows the short term direction of the market.

Yet there’s also an element of disingenuousness or easy fashionableness in the current defense of the “I don’t know” thesis. All of a sudden, our best financial commentators have taken on a facile skepticism that makes me suspicious.

Their motivation: Fear of stating the obvious.

The popularity of “I don’t know” is due to the fact that stocks and other securities appear undeniably expensive on a variety of metrics, including a plain P/E ratio, the Shiller PE and Tobin’s Q ratio.

So the response of well-meaning (but perhaps misguided) commentators is to say “I don’t know” in the interest of preventing investors from engaging in market-timing and selling their stocks in a panic.

I understand this motivation, and preventing panic selling is a noble goal. Yet ultimately it simply isn’t true that there is no knowledge about market valuations or future returns, and it does a disservice to investors to always say flatly “I don’t know” about such things.

True, we don’t know what the market will do over the short term, but we know with some reasonable probability what it might return over the longer run. The Shiller PE and Tobin’s Q provide some significant probability beyond zero with regard to future 10-year returns.

So what is probable?

We don’t have zero or no knowledge. We don’t have certainty either, but it’s probable that stocks will deliver anemic returns over the next decade given where Shiller and Q are currently. Incidentally, stocks have provided anemic returns for the past 15 years (less than 5% annualized for the S&P 500 SPX, -0.53%  including dividends) with the starting Shiller PE for the period above 40. So talk that the Shiller PE has lost its mojo isn’t accurate. The market delivered significantly subpar returns for the following 10- and 15-year periods starting from the highest Shiller PE on record.

Could stocks return something like their extremely long-term 10%, before factoring for inflation, from this point over the next decade? Yes, it’s possible. But it’s not probable. So saying, “I don’t know” is actually dishonest and disingenuous. We don’t know with certainty, but it’s probably true that stocks will deliver subpar returns over the next cycle or decade or possibly two decades from this present starting valuation.

Moreover, if it’s true that the new average for the Shiller PE might be in the 20s instead of 16.6, which is the long-term average since 1870, a significant portion of the total return stock investors enjoyed previously was from dividends. Today, the S&P 500 is yielding less than 2%. That means growth would have to be prodigious for stock to return their customary 10% before inflation or 6.5%-7%, real, even if the “new normal” for CAPE is in the 20s.

It’s better to say stocks will probably, though not certainly, deliver subpar returns partly because it’s true, and because investors must plan for real financial goals in any case. If advisers tell clients flatly “I don’t know” with regard to likely future returns, advisers are providing no help, and a client may dangerously assume the long run return for stocks of 10% will be delivered over the next decade.

Consider the more honest and truthful answer — something like “I don’t know for sure, but from current starting prices and valuations stock and bond returns will probably be subpar relative to their very long term averages.” In this way, an investor can begin the planning and investment process assuming a historically lower rate of return, and build an allocation accordingly. The client will also arguably be operating within a margin of safety by being a bit pessimistic about future returns.

Investing is difficult because it’s just as false to assert that we don’t know anything as it is to assert that we know things with certainty. We have to live our investment lives in the middle of those easy cop-outs and make due with frustratingly imperfect insight and knowledge.