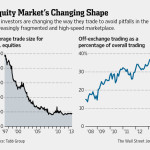 For as long as stocks have been changing hands, it’s been clear that very large trades required special attention and handling. It’s one thing to simply buy 100 or 500 or even 5,000 shares of a stock, but it’s an entirely different thing to try and buy or sell a million shares or more.

As a result block trading, or special execution services, have always existed under the nickname “upstairs trading,” in reference to the fact that they were arranged and negotiated off the floor of the New York Stock Exchange.

But now, new data shows that nearly 40% of trades are being done off exchange, as more and more large, legitimate institutions simply can’t be bothered dealing with our ‘’increasingly dysfunctional” market place.
“I’m not altogether confident that we have in place the kinds of regulation or control (needed) to protect small investors. That’s what concerns me,” says Hugh Johnson, the chairman of Hugh Johnson Advisors, in the attached video.

Specifically, there are 13 different exchanges and more than three dozen so-called “dark pools” where most trades go to get executed, right alongside the rivers of high-frequency tradings orders and other computerized or alogorithmic trades. It’s a shared system that has been a source of frustration and the focus of investigation into what Johnson refers to as a counter-productive cat and mouse game.

Even so, he points out that block trading desks or upstairs trades have been with us for a very long time, and aren’t themselves problematic. In fact, short of breaking a one million share order into a thousand different thousand share orders, all being bought or sold at different times and prices, it’s not really possible to efficiently do large transactions without sending them upstairs, so to speak.

All the same, Johnson says small investors still need to be protected in the spirit of maintaining a fair and orderly marketplace.

“If a large transaction occurs below your buy-price, you want to participate in that lower price,” he says, adding that “there has to be steps taken in order to protect you.”

“To me it is very, very troubling,” he says. “We need a lot of regulation in this area and I
think the Wall Street Journal article will bring attention to this problem.”

Lululemon’s New CEO Will Put Embarrassments in the Rearview

Fierce Competition Between Retailers Has Huge Upside for Customers